Last November, I wrote about the first time I was able to meet and thank a group of 100 WWII veterans, who participated in Honor Flights out of Gulfport, Mississippi. 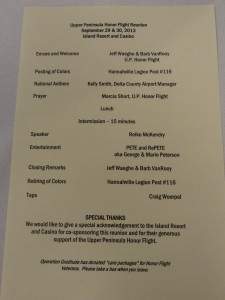 Since then, primarily due to the economy (and the consequent need to stay focused on our cash flow and investments), I kept speaking engagements to a minimum.  An exception was made for September 29 and 30.  The commitment for the Upper Peninsula Honor Flight Reunion was made almost immediately following the last event in Gulfport.

This event took place at the Island Resort and Casino in Harris, Michigan, which was an eight-hour drive each way from home.  (The area is near northern Wisconsin.  Consequently, most people in the western UP relate more closely to Wisconsin – such as the Green Bay Packers – than to the rest of Michigan, which is separated by the huge Lake Michigan.)  With the stunning beauty of the fall colors of northern Michigan, the timing could not have been better for us to visit there. Finally being able to meet the organizer of the event, Barb Van Rooy, and everyone else who supported her efforts, was every bit worth the long wait and the trip. 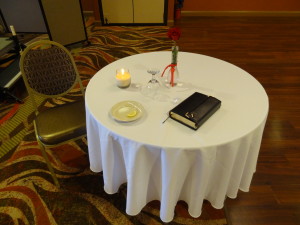 The prayer by Marcia Short, acknowledging the POWs (prisoners of war) and MIAs (those missing in action) reminded us of the ultimate sacrifices that were paid, defending the freedom that most of us have been able to enjoy for nearly seven decades since the end of World War II. Talk about goose-bump moments…  According to the Defense Prisoner of War & Missing Personnel Office, more than 73,000 Americans remain unaccounted for from WWII. Freedom is like air.  It is so vital to our well being.  Yet, like air, most of us cannot begin to appreciate how precious freedom is until it is lost.  Unlike air, freedom is not free at all. It never has been; and it never will be because of human nature being what it is.  Those recognized in the prayer and those present alike, the WWII veterans – the Greatest Generation of Americans – inspired me once again to do my part to carry the torch of protecting freedom. 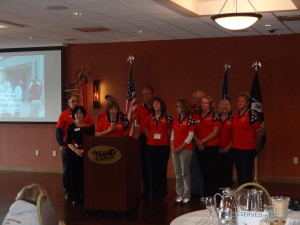 Thanks to the organizers’ efforts, I was able to personally meet and shake the hands of some 200 WWII veterans and thank them for their part in keeping freedom alive.  Being able to meet them is truly an honor. During our conversations, several of the veterans confirmed for me, citing their own personal experiences, some of the historical accounts about which I spoke.  For instance, one of them confirmed that the Japanese people were indeed nowhere to be found immediately after the surrender because they went into hiding. 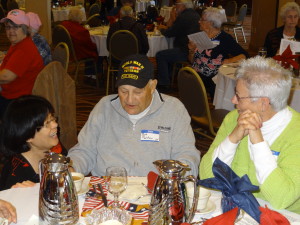 In another example, they confirmed that what General MacArthur drilled into the U.S. military personnel in post-WWII Japan was true. In other words, if any of them were found to be mistreating the Japanese, they would be swiftly and severely punished without exception – no ifs, ands, or buts. 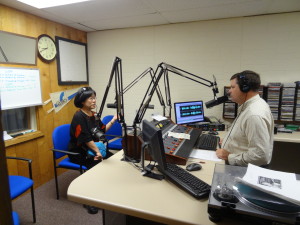 Being interviewed by Craig Woerpel, News Director, on the 680 Morning Show .

Day 2 of the Reunion, September 30, 2013, began with a live radio interview by Craig Woerpel, News Director, during the 680 Morning Show in Escanaba, MI.  At 8:30 a.m., Craig started out his program by interviewing Congressman Dan Benishek. The topic was about the potential, partial shutdown of the federal government starting the next day. (It did happen and lasted for 16 days.) Then Craig put me on the air at 8:40 a.m.  The main topic was about Japan’s gratitude for America.

During the entire Honor Flight Reunion, there was so much love, respect, and commitment for one another in the air. David and I left the area feeling like we have gained some of the most wonderful, life-long friends in the UP.

We even liked learning that those who live south of the UP in Michigan are being affectionately (!?) identified by “Yoopers” (UPers) as the “trolls” from “down state.”  Who would have known!?  To that, I say, “I love you, guys, too!”

All kidding aside, the reactions I receive from speaking to the WWII veterans and their family members are so rewarding to me that I would like to start allocating an increasing amount of time for speaking engagements as soon as I am able.  This will happen when I’m confident that our business of investing outside of Wall Street is profitable and fully under control.

There is no true freedom without sustainable financial freedom for the rest of one’s life. After nearly a decade of trials and errors, I believe I’m finally very close to running our business successfully.  (I am older today than when KFC’s Colonel Sanders – the famous late bloomer – became successful.  Better late than never!)  I look forward to the day when I can say, without any hesitation, “Now I can devote the majority of my time to what I believe I was born to do,” which is to spread the words of gratitude from Japan to American WWII veterans and their families.

p.s.  I am taking the liberty to keep my notes here about what we experienced during our short stay in the Upper Peninsula.