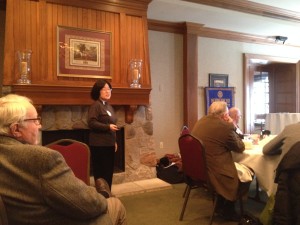 Speaking on Japan’s gratitude for America. I like being able to see the same screen as the audience. The remote control rocks!

Sometimes, life seems to work in a wonderfully mysterious way. Just yesterday, I spoke at the Bloomfield Hills Rotary Club at its weekly luncheon gathering. The topic on which I spoke was Japan’s post-World-War-II gratitude for America. What I presented was a shorter version of the speech that I normally give to World War II veterans.

I have heard of the Rotary Club since when I was much younger and been curious about it but never took the time to figure out what the organization was about. The luncheon invitation and consequent exposure to it changed all that.

Being among the small group of members was like being in a microcosm of America, the very reason I was always drawn to this country as I was growing up in Japan.  The Rotary Club is made up of people who are committed to making a difference in the lives of others. Rotary International’s motto is “Service Above Self.” That is one of the most profound three-word phrases I have ever heard!

That motto is reflected in Rotary’s accomplishments. I found out, for instance, that the Rotary Club has been the driving force behind eradicating polio around the world. It started in 1979 and, as of 2006, polio has been reduced to four countries: Afghanistan, India, Nigeria, and Pakistan. Between 2007 and 2009, Rotary received $355 million in challenge grants from the Gates Foundation for this purpose.  And here is the latest update: for the last three years, India has been free of polio. 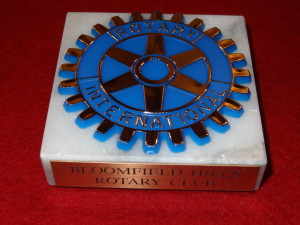 After the speech, I was presented with this beautiful paper weight.

Because of the nature of my speech, I talked about General Douglas MacArthur and the untold positive influence he had on the lives of millions of Japanese during the post-war era. One of the gentlemen in the audience mentioned that General MacArthur was a Rotarian. That made such perfect sense! “Service Above Self.”

Along with David, I am being invited to become a member of the Club. I am honored, humbled, and overwhelmed – all at the same time. Part of me says, “You have benefited so much from people like General MacArthur who cared about humanity, even for America’s former enemies. Now, it is your turn to serve others.” “Service Above Self.”

The other part of me says, “You are so close to launching your business successfully, finally. Now is the time to be laser-sharp focused on your business so that, when it does take off, you will then be able to serve others much more effectively with what you know.” “Service Above Self.”

I believe that what I have been focused on for the last decade in my pursuit of sustaining freedom, backed by financial freedom – by investing outside of Wall Street and, most importantly, the lessons I learned during that time – can be quite useful to others. “Service Above Self.”

Immediately after the luncheon, I began doing some serious soul searching as to whether or not to accept the invitation to become a Rotarian. The best-case scenario for me would be if I can postpone accepting the invitation until such time when I am ready to carve out the right amount of time to do a good job. If all goes well, according to this year’s goals that I had set for myself, by the beginning of the third quarter, I should be ready to take on another challenge. “Service Above Self.”