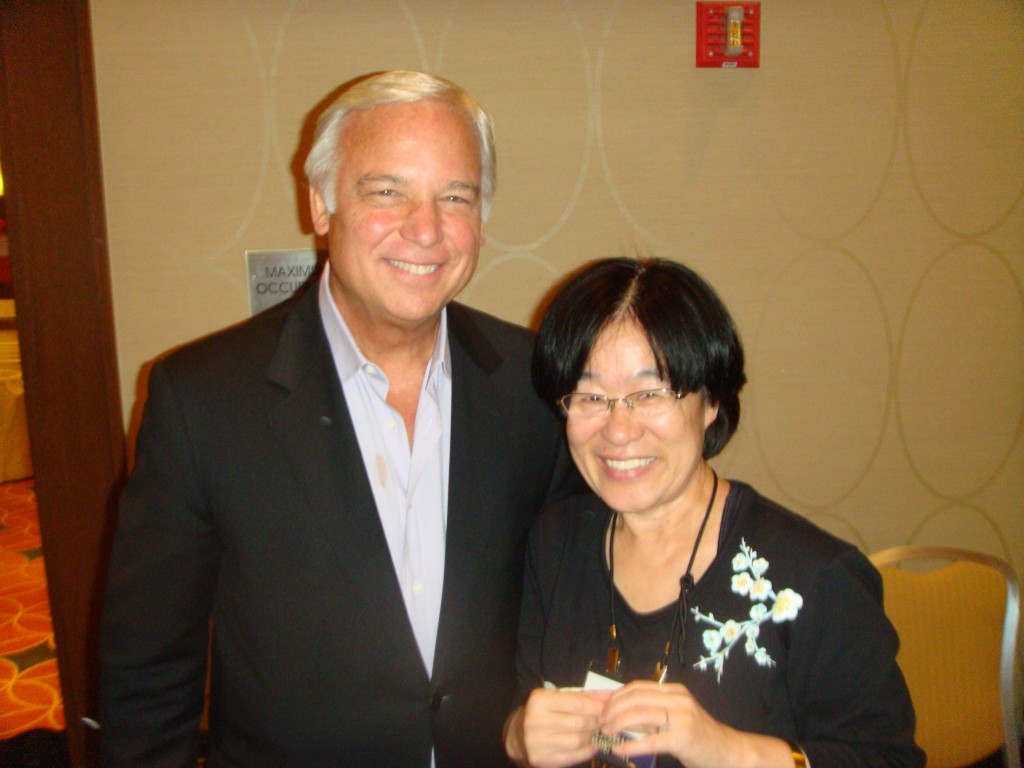 With Jack Canfield at the Bestseller Blueprint Live event

One of the ways to achieve something significant over time is to work toward your goal every day.  Jack Canfield says, “If you write one page every day, you will have a 365-page book in one year.” How true! As you probably recognize the name, Jack is co-author of the “Chicken Soup for the Soul” series. He is one of the mentors I have been privileged to learn from through the Bestseller Blueprint program.  If Jack is Yoda, Steve Harrison is Obi-Wan Kenobi of the program. Steve and his company, Bradley Communications, have been responsible for making famous such authors as Jack, Mark Victor Hansen, Robert Kiyosaki, and John Gray, just to name a few. It is hard to believe that, once upon a time, these authors were complete unknowns to the public, isn’t it? With so much that I have learned from Jack and Steve during the last couple of months, I have established a new daily routine in terms of marketing. Let me share it with you. This is just a glimpse of what I have learned and implemented thanks to the Bestseller Blueprint program. You, too, can apply the same technique – if you so choose – to reach your target audience for your book.

Last month, I mentioned that one of my most important target audiences – for my book – was veterans of World War II who fought in the Pacific. I then mentioned that I created a video clip for them to view on YouTube. That’s where the last blog post ended.

Shortly thereafter, I also created a specific URL that makes it easier for people to remember and find my YouTube video when, for instance, I am being interviewed on radio, television, or by bloggers. That URL is www.ThankYouVeterans.net.  For most people, this is much easier to remember than the rather unusual spelling of my name, which is also the name of my main website, http://ReikoMcKendry.com.

Next I needed to figure out a way to somehow find these veterans. The objective, of course, was to bring my short message of gratitude to them.

The first step was to find out where, specifically, in the Pacific these veterans had fought. Thanks to the Internet, I was able to identify several such locations. Then I set up Google Alerts to receive any and all recently-published information related to these veterans. Here is an example of my Google Alert query: World War II veterans, Iwo Jima. I have several such Google Alert queries set up; the only difference among them is the specific name of the island where the battle took place.

Since I set up these queries on August 15, 2012 (which happens to be the 67th anniversary –  Japan time – since the end of WWII), almost daily, Google Alerts have been bringing to my attention several news items that identify the names of those who fought in the Pacific. I have been able to place my comments on most of these articles, encouraging them to view my video.  In some cases, where there is no place to leave a comment, I send an e-mail to the reporter who wrote the piece. Either way, with slight tweaks, my message remains basically the same. But I know it is fresh news to each of the veterans and reporters. So I’ve been at it every day. The number of “views” on YouTube has been increasing slowly but steadily.

Also thanks to Google Alerts, I have been learning a lot more about World War II veterans. The number of American soldiers who fought in the war was 16.1 million. Of those, only 1.7 million are still alive today. Sadly, according to Veterans Affairs, they are dying at the rate of about 740 per day. At this rate, by the time the 70th anniversary since the end of WWII rolls around in August 2015, there will be fewer than 1 million veterans left. This gives me a sense of urgency to reach as many of them as I can while they are still here to listen to my short message of profound gratitude for bringing food, peace, and democracy to my native country of Japan after the war.

For the victor to show mercy to the vanquished was a foreign concept to the Japanese military during the war.  I cringe when I think of WWII that might have been won by Japan and/or Germany.  The goal of these countries’ military forces was territorial expansion – at whatever human cost.  In contrast, the goal of the Allied Forces, including the United States, was to stop evil from conquering the world.  Compassion shown by American soldiers after the war was the reason my parents and their generation of Japanese held America to the highest pedestal. This is why I have been fascinated by the United States of America ever since I was a little girl in Japan.

Reaching as many of these WWII veterans as possible has become one of my most important missions in life. They made it possible for the citizens of the United States to continue to enjoy freedom. They are my heroes.

If you, too, can help me locate them or let them know about www.ThankYouVeterans.net, I would appreciate it very much.

I welcome your comments and questions.

1 Response to Reaching your target audience