While growing up in Tokyo, annually, our parents took my brother and me to the family gravesite at the Tama Reien (多磨霊園) cemetery. They told us that many famous people were buried there, too. Today, thanks to the Internet, you can search for names to find out if anyone you know is buried there. For instance, my curiosity was satisfied when I found Isoroku Yamamoto, the Harvard-educated Japanese Navy Admiral, who died during World War II. By the way, for those of you who are language buffs and would like to understand the meaning behind the Japanese words:

Over the years, whenever David and I went back to Japan, we visited the cemetery. When our sons were young, we did the same, along with my brother and parents. Within the cemetery premises, no vehicle is allowed except by staff for burial purposes (or perhaps for those in wheelchairs). In other words, it was necessary for visitors to walk not only from the nearby train station to the cemetery but also from the cemetery entrance to the family gravesite. It was quite a distance, perhaps a few miles total. Because I was used to walking in Japan, I never thought much about the distance. When our younger son, Jason, came along, he asked, “Can we pay respects to someone else instead and leave?” The rest of us had a good laugh, and we all kept on walking until finally arriving at the site.

For me, it was worth the long walk just to be able to see the tombstone with our family name engraved on it. We all took turns sweeping the grounds around it, lighting up incense, placing fresh-cut flowers, ceremoniously pouring purifying water from the top of the stone, and praying for our ancestors’ eternal peace by placing palms together, bowing the head, and closing eyes.

In the United States, a deceased can either be embalmed or cremated. In the Midwest, at least, cremation is not yet common, however. In contrast, in Japan, due to its space limitations, all the deceased are cremated. Typically, each gravesite contains ashes of family members, separated by each urn.

Recently, upon my asking questions about our family gravesite, my brother explained that, like any real estate, some sections of the cemetery were permanently owned by each family, whereas other sections, such as where our family tombstone stood, were being leased. Who would have thought that a final resting place could be leased? I assume that this buy-versus-lease decision was made by our father when his mother died (around 1955) and needed to decide where her final resting place should be.

In any case, because my brother knew how important it was for me to pay respects to our deceased family members whenever I came back to visit Japan, he kept on making the lease payments for the gravesite for years – without ever mentioning it to me. I also learned that, because he knew he was the last of the bloodline to remain in Japan, the family gravesite was never as important to him as it was for me. He said that if it were solely up to him, he would have stopped making the lease payments long ago. I had no idea, although having grown up in the same difficult family environment, it is not surprising that he felt this way.

I then asked him a very-difficult-but-need-to-know-the-answer question. Gulp… “What happens to your ashes when you die?” Putting me at ease, he answered matter-of-factly that they would still go to the same cemetery but in a communal area to which our family-member ashes will also have been relocated when lease payments will have stopped.

As soon as my brother gave me the answer to his final-resting-place question, I felt relieved – although it was sad to accept the fact that there will be no more family tombstone to visit. I thanked him and said that it was not necessary for him to keep making the lease payments. I told him that I would still visit the cemetery to pay respects to everyone in the family, including him, of course, if he were to depart before me. He then said, “Oh, by the way, my final resting place – as well as for the rest of the family members who preceded us – is much closer to the cemetery entrance.” That was a rather comforting piece of information. He and I both chuckled, remembering what Jason had said years ago when he was tired of walking.

To finalize this post, at the cemetery website, I searched my maiden name which, of course, was the name on our family tombstone. The search showed no result. I am content knowing, however, that my family members’ ashes will always be at the Tama Reien cemetery in Tokyo.

You can click on the first photograph to enlarge; the rest can then be scrolled through: 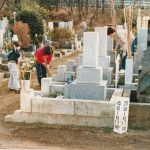 Boys and I cleaning the gravesite 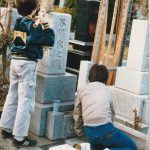 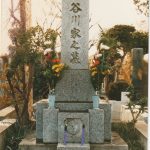 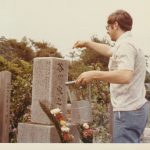 I have not seen David’s hair that long until the Covid-19 lockdown! 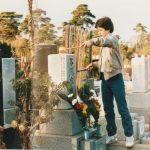 Jesse purifying the tombstone as Jason looks on 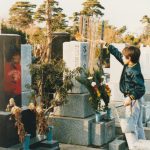 Jason’s turn. Never noticed, until now, my reflection – looking at Jason – on the next-door tombstone 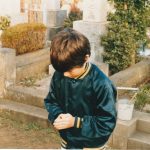 Once at the gravesite, he did not mind paying respects to his own ancestors 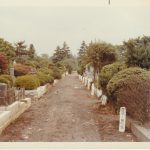 Scenery near our family gravesite

This entry was posted in War*Peace*Gratitude. Bookmark the permalink.