Marketing campaign’s side benefit: the alignment of the stars

As the year end approaches, I’m grateful for all that happened during 2012. This is the year that felt like the stars were aligning to help me live the rest of my life in peace – at least in terms of what troubled me the most for the majority of my life since, as a youth, I became aware of Japan’s surprise attack on Pearl Harbor in 1941. Living in the United States made the awareness even more acute.

The sense of alignment between where I come from and what I do today began after my autobiography was published in March. What started out as a simple marketing campaign for my book became my mission. It is to thank those who matter so much to me; namely, American World War II veterans. Collectively, they are directly responsible for the freedom and independence that I have been able to enjoy. It is as if everything I experienced in life so far – starting from my difficult childhood in Japan to living a life in America as its naturalized citizen – was a training ground for me to openly express gratitude to America on behalf of my parents and their generation of Japanese. This has been long overdue.

As usual, this blog is being posted on the 17th of the month. I’m writing it, however, during the first week in December in Guam. Guam is the western-most (i.e., Far East) territory of the United States of America. It is approximately 3.5 hours by plane, due south from Narita, Japan. Because of our serious belt-tightening since the beginning of 2010, I did not think that we would be travelling this far from Michigan, even in late 2012. David had a different idea. He wanted to make sure to continue celebrating our 40th-wedding-anniversary year and conclude it in Guam – our most favorite vacation spot – with a bang for only $162. (No, that’s not a typo! You can scroll all the way down to the bottom of David’s travel blog to find out how he did it.)  The semi-permanent background picture on David’s website is a view from Hilton Guam, looking east at Tumon Bay. Here is a picture of Hilton Guam itself, my favorite, looking west from the same bay. 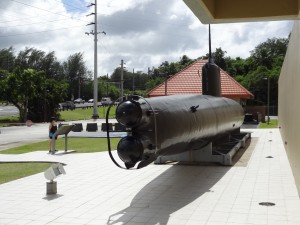 This year, being here in Guam also meant even more to me than just another wonderful vacation with David. On December 5th, we visited the T. Stell Newman Visitor Center.  It is part of the War in the Pacific Historical Park. We spent about three hours at the Center, reading and watching everything on display. Although I’m developing a thicker skin, it is still quite troubling to be reminded of the atrocities inflicted upon humanity by the Imperial Japanese military. I am grateful for the American war museums which, while stating historical facts, emphasize the importance of promoting a peaceful relationship with Japan.

Then on December 6th (or 7th, Guam time) an article was published in the Saratogian in New York.  It was based on an interview of me by Mr. Paul Post. Mr. Post had originally planned on it being published on December 7th. I was a bit apprehensive about the timing. After its publication one day earlier, and after receiving a few encouraging comments that Mr. Post forwarded to me, I finally accepted the idea that it was fine for me and my name to be out in public on December 7th – the day that has indeed lived in infamy in my mind.

Because of my marketing activities which started in August of this year, I was able to get the words of gratitude out in public via YouTube.  As a direct result of it, I was able to meet over 100 WWII veterans.

Did the marketing activities for this year result in a significant increase in revenues from my book sales? No. In fact, as of this writing, I have yet to recover the total cost of publishing and marketing it.  This situation makes me even more motivated to succeed in real-estate investing in 2013 – so that I can offset the cost.  I must say, however, that being able to thank the veterans who gave me my freedom is priceless.

Wishing you and your loved ones Happy Holidays!