“The Patriot Parent: Still the Best Hope for America” by Pat Montgomery

I’m excited about the New Year which brought with it a sense of purpose. Originally, when I chose to blog about marketing, I did so because I wanted to share with you what worked and what did not in terms of marketing my book. Never did I imagine that the concept of marketing could become equated to a personal mission. But it has. That mission is to reach out to as many World War II veterans as I can before it’s too late.

Each time after a reporter publishes an article or I give a speech about my mission, I have been approached by some of these veterans. While their experiences vary, for many of them their message is quite similar. They had carried their hatred of the Japanese with them every day since the war; now they were able to finally let that go. Each time, I’m humbled by their words. It is as if everything I experienced in life – from a difficult childhood in Japan to today as an investor – was a training ground for these moments.

When this mission was attached to the message of my book, magic began to happen. I started meeting some very fascinating people. In my monthly blogs for this year, I’d like to introduce some of them to you.

The first one to be featured is Ms. Pat Montgomery. She is the author of “The Patriot Parent: Still the Best Hope for America.”  I chose her for two major reasons. 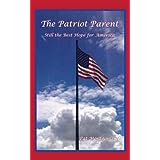 First and foremost, I believe in her book. I explained why in my review comment on Amazon.  I wish I had this book when our children were growing up – to give them a sense of what makes their country great; and to teach them never to take freedom for granted. If you are a parent of school-age children, I urge you to check it out.

Second, Pat and I felt an instant connection when we met. Because of my mission, I always talk about wanting to reach out to WWII veterans. It turns out that her father, Mr. Joseph R. Hill, is a WWII veteran who fought in the Pacific.

Here is Mr. Hill’s short story as told by his daughter, Pat: “He served in the 2nd Marine Division in the Pacific from 1943-1946. He saw action at Tarawa (his first battle at the age of 19), Saipan, Tinian, and patrolled the streets of Nagasaki after the bomb was dropped. He could not speak about the war until I took him to the dedication of the WWII Memorial in DC on May 29, 2004. It was an amazing experience that opened the flood gates for him and he has been able to discuss it ever since. Some of the things he remembers are gruesome, some funny, and all in between. He stopped writing home because it was too painful to remember home when he was just trying to get through each day alive while so many were dying around him. On Saipan he was given a commendation for his service and at some point became a staff sergeant – he was a gunnery sergeant. He currently lives in Alpharetta, GA and can still tell you on a day-to-day basis where the Marines have troops around the world.”

Having just finished watching the 10-hour HBO series, “The Pacific,” directed by Steven Spielberg and Tom Hanks on DVD which originally aired in 2010, I can appreciate why Mr. Hill and so many of these veterans did not want to talk about their war experiences for so long. If there is anything that magnifies the word “horrific” one thousand times, it is their experience from the battle grounds. They did what they did – so that millions of us can enjoy freedom. The alternative, which was a very real threat at the time, would have created a world of tyranny, much greater destruction, and misery for the masses around the world. I say this as a daughter of America’s former enemy.

My wish is for the younger generations of Americans – and for the rest of the world – to understand this historical fact. Pat’s book, “The Patriot Parent: Still the Best Hope for America,” is a great start.

I welcome your comments!